Adventures of a Cake Diva

A Blog About Adventures in Baking and Cake Decorating

Are you the kind of person that likes to keep things simple?  In theory, I am.  In reality, I have a tendency to go about a lot of things the “hard” way.  It’s just how my brain is wired.  The simple route just isn’t always intuitive for me.  I’ve been working on it.  In fact, I did so as recently as this morning, while I was stirring around my kitchen making these Mardi Gras Cupcakes. 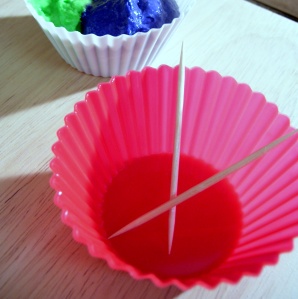 I was fixated (okay, borderline obsessed) with figuring out how to spoon the trio of colors into the cupcake liners.  Should I use toothpicks to divide the liners into three discrete sections?  It worked, but it was a real pain.  Then, I stopped for a moment.  I decided to play with it a little bit.  Low and behold, I discovered that the best way to make these babies is just to take a heaping teaspoon of each colored batter and just drop it into the liner.  Not every cupcake will look the same.  No worries.  You’ll still end up with a colorful and fun treat. And that’s what we’re after here, isn’t it?

Although the cake looks blue in this photo, I promise that it was really a deep purple.

For the cupcakes, I used one of my favorite Yellow Cupcake recipes, which I’ve posted below.  Another good recipe is the one that I used for my Candy Corn Cakelets.  I wanted to shake things up a bit with the frosting, so I opted for my Whipped Frosting that’s not too sweet.  Other than this frosting’s light and creamy texture, the best thing about it is the hint of cream cheese, which adds some real depth to the flavor.  Combined with the simplicity of the yellow cake, it makes for quite a tasty little treat.

Preheat your oven to 350 degrees. Place cupcake liners into your muffin tins. In a small bowl, whisk together flour, baking powder, and salt; set aside. In a liquid-measuring cup, mix milk and vanilla; set aside. In a separate bowl, use an electric mixer to beat the butter and sugar until light and fluffy. Add the eggs one at a time, beating well after each addition. With mixer on low speed, add one-half of the dry ingredients, followed by milk-vanilla mixture, then remaining dry ingredients. Do not overmix.

Divide batter evenly among three smaller bowls. Using purple, green, and yellow food coloring, tint the batter in each bowl a different color. Using a teaspoon (each bowl should have its own spoon), dollop a heaping spoonful of each color into the cupcake liners. Bake for about 20 minutes, until a toothpick inserted in the center comes out clean. Cool the cupcakes in the tin for about 5 minutes. Then remove and place them on a cooling rack until they cool completely. Recipe makes 12 cupcakes.