Adventures of a Cake Diva

A Blog About Adventures in Baking and Cake Decorating 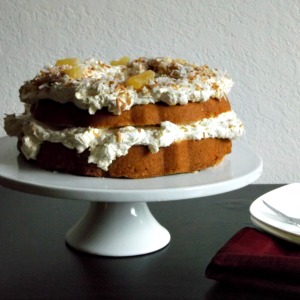 What inspires your baking?  I tend to get pretty excited by ingredients.  Often, I’ll challenge myself to make something using only the ingredients that I have on hand in my pantry and refrigerator.  I like to do this to flex my creative muscles, and quite honestly, I’m on a tight budget.  Because I’m budget conscious, I try very (very) hard to stick to my grocery list.  But, every once in a while, a special ingredient will catch my eye.  That’s what happened here.

Fresh pineapples were on sale at the grocery store, so I decided to splurge.  By the time I hit the check-out line, I knew that I was going to make this pineapple curd.  After swiping a spoonful, I decided to pair it with a coconut pound cake.  After swiping a couple more spoonfuls, I was convinced that this creamy curd was begging to be blended into a light, dreamy Swiss meringue buttercream. 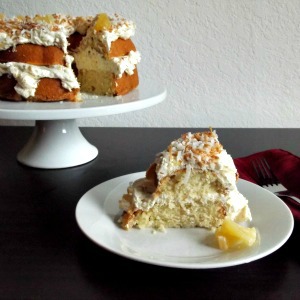 While this cake looks somewhat impressive, it is not difficult to make.  Yes, there are several components.  Don’t become overwhelmed by them.  You can make the curd ahead of time, and it will keep refrigerated in a sealed, glass jar for up to one week.  (I made my curd on Saturday and baked on Sunday.)  After I pulled the cake from the oven, I toasted the shredded coconut.  While the cake was cooling, I made the buttercream.  Just have a game plan and work it.  No biggie. 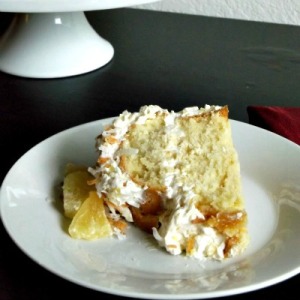 The flavors and textures of the cake and buttercream mingle beautifully.  This pound cake has a delicate coconut flavor.  The cake is moist, but dense, as you would expect with a pound cake.  I split the cake in half and slathered it with the pineapple Swiss meringue buttercream.  After I sandwiched the two layers together, I topped it off with another layer of buttercream.  Oh my, I could (but didn’t) eat the bowl of buttercream on its own.  It’s light and creamy with a slight tang from the pineapple curd.  On a whim, I tossed in a couple of small handfuls of toasted coconut to give it a little bit of a crunch.   As a finishing touch, I sprinkled the top of the cake with toasted coconut and added some dried pineapple as a garnish.  Simply put, this cake is so dang good that I can hardly stand it.

What ingredients have you been inspired by recently?

1 cup reduced unsweetened coconut milk, room temperature – Take one 13-14 ounce can of coconut milk and place it in a large, deep saucepan.  Bring it to a boil over medium-high heat.  Reduce the heat to medium-low, and bring it to a boil until it has reduced to one cup.  This process takes about 15-20 minutes.  (Sorry that I forgot to snap photos.  It’s not hard.  I promise.)

Pre-heat your oven to 325 degrees.  Prepare your 9 inch Bundt pan either with grease and flour or a non-stick spray for baking.  In a small bowl, combine flour, baking powder, and salt.  Whisk together to combine and set bowl aside.  Next, using the bowl to your stand mixer, mix together the butter and sugar until they are light and fluffy.  Add the eggs, one at a time, until well combined with the mixture.  Add the vanilla.  Then, alternate adding the flour mixture and coconut milk in three separate additions.  Pour the batter into the Bundt pan and bake for approximately 1 hour, 15 minutes.  Since oven temperatures vary, I started checking on my cake after one hour.  It took my cake 1 hour, 15 minutes to bake.

Inspired by Anonymous on Cake Central

Combine the egg whites and sugar in a heat-proof bowl that will fit your stand mixer, and place the bowl over a pot of boiling water on your stove.  Stir continuously until this mixture reaches 160 degrees (use a candy thermometer) and the sugar has dissolved.  Remove from heat and place the bowl under your stand mixer with the whisk attachment in place.  Beat the mixture on high speed until it holds stiff peaks.  Continue beating the mixture until it is fluffy.  Then, remove the whisk attachment and place the paddle attachment onto your mixer.